How to Explain Ramadhan to a non Muslim


Ramadhan is here, so why do we fast?

This year's Ramadhan is upon us and many Muslims the world over are waiting for this blessed month and preparing for it with much anticipation and hope. John, Hashim's friend and roommate from university, is coming to visit him for the holidays, which this year will be during Ramadhan. Hashim feels obliged to explain to him that during this period, it will not be quite so “normal” in their home, and he expounds on what this would mean.

Ramadhan, the ninth month of the Islamic lunar calendar is when the Qur'an, the Muslims' religious book which guides their everyday lives, was revealed to the Prophet Muhammad (SAW) by the angel Jibreel (Gabriel). It is, therefore, of special significance to Muslims.

So, what happens during Ramadhan? Muslims fast for 29 or 30 days of this holy month depending on the sighting of the moon, which is used to mark the beginning and the end of the fast. Fasting, which is called ”saum” in the Qur'an, literally means "to abstain". According to Islamic law, the word saum means to abstain from all those things that are forbidden during fasting from the break of dawn to sunset. Fasting is one of the five pillars of Islam which all Muslims follow and adhere to as part of their worship of Allah.

Muslims abstain from food, drink, and sexual relations with their spouses. They also become more spiritual and do extra night prayers known as Taraweeh and Tahajjud. Muslims also do more supplications and make an increased effort to read the Qur'an more often and reconnect with its meanings. It’s also an opportunity to understand it better so that they reform their errant ways.

Some prepare by fasting optional fasts in the preceding months of Rajab and Sha’aban. Some organise iftaar, food to break the fast, for the disadvantaged in society who cannot get a meal to eat after a long day of fasting.

Why do Muslims fast then?

Allah says in the Qur'an, “O you who believe, fasting is prescribed for you as it was prescribed for those before you, so that you may guard against evil” (English Translation of the Qur’an, 2:183). This shows that fasting was also prescribed for past nations and prophets and is a spiritual practice to be found in all major religions. This is corroborated when we are told that Jesus fasted forty days and forty nights, as explained in the Bible: “It is written, man shall not live by bread alone, but by every word that proceeds from the mouth of God” (Matthew 4:2-4). Moses also fasted forty days and forty nights (Exodus 34:28). We therefore realise that this practice was encouraged and is still encouraged by many religions as a way of self-reform and learning abstention from the baser human desires that include eating, drinking, and sexual gratification.

It is attributed to Imam Ja’far as-Sadiq (A.S.) that he said: “Your day of fasting should not be like ordinary days. When you fast, all your senses, eyes, ears, tongue, hands, and feet must fast with you.” This hadith shows that one must abstain from sinful acts and even thoughts and bad speech. We cannot be fasting and abuse others or slack off from work because we feel weak from hunger and thirst.

Muslims fast during Ramadhan and many reasons can be found in Qur’anic verses and hadith (reports from what the Prophet (SAW) did, said, or approved of). It is in obedience to the command of Allah and we do it to gain rewards and blessings (multiplied many times over) from Allah. Fasting is done to seek and receive forgiveness from Allah for our sins and shortcomings. We also learn self-restraint and to guard against evil.

We benefit from fasting because it is an opportunity to get rid of undesirable habits, to inculcate and increase fortitude and patience, and to empathize with the less fortunate members of humanity who suffer from hunger due to poverty.

Fasting is not only good spiritually but also physically as there are health benefits associated with it such as weight reduction, improved gastrointestinal function, and improved eating habits, and an overall feeling of physical well-being.

In this month, patience and mercy leave the Muslims with a developed sense of self-control in several areas including diet, sleeping, and the use of time.

Hashim therefore demonstrates to John the significance of Ramadhan and the benefits gained from fasting. 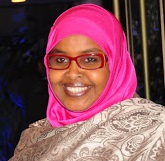 I am an international civil servant creating value for society through the global postal system. I am currently doing a PhD in Communications Studies as well as finalizing an online Bachelor degree in Islamic Studies, though I have an MBA in strategy and marketing, a BA (Hons) in languages and a postgraduate diploma in Public Relations. I enjoy writing on topical issues that spike my interest and wish to provoke thinking and reflection from my writing.