Drizzles, showers, and heavy rains pour down: this has been the weather for the past week.

In most parts of Kenya, the rainy seasons create havoc. Last month, heavy downpours caused the River Narok banks to burst and the area flooded. 15 people died. This week, heavy rains have proved fatal. Our roads are plagued with poor drainage systems and cars got stuck in South C, South B, Lang’ata Road, Nairobi West, and Kileleshwa. 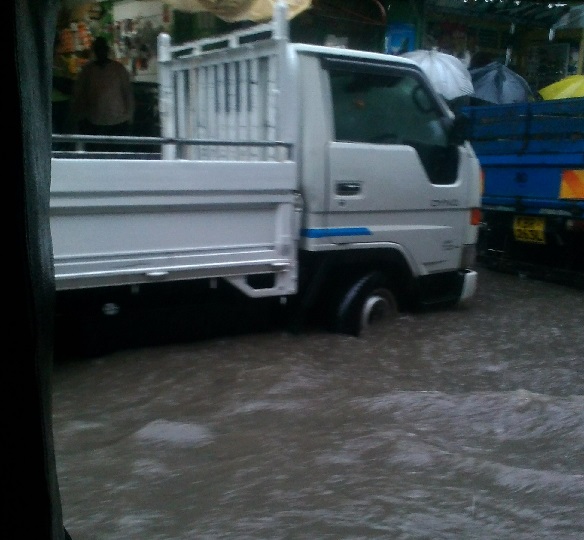 Commuters were stranded and some reached home past midnight. In South C, a school bus loaded with children got stuck at Muhoho Avenue half submerged in water. In South B, the wall of a mosque collapsed under heavy rainfall killing 9 people. Without a doubt it is a worrying situation.

The only way to play safe is to stay home. That is almost impossible as people have jobs and students have to go to school. Mostly, the heavy rains start to pour at night. Reaching home as soon as possible should be one's top priority to avoid being stranded. If already caught in the rains and floods, much care should be taken when walking through the water since some roads and paths have sewage holes.

Kenya Power substations in Nairobi West and Karen were switched off on May 13 as they were submerged in overflowing water. This has led to power failure in South C, South B, Madaraka Estate, Bomas of Kenya, Hardy Estate, and parts of Lang’ata.

In Kenya, power cuts are frequent during this type of weather. Without a doubt, the power stations are not equipped and prepared for the heavy downpours. As we have seen, the substations in Nairobi and Karen had to be shut down. If the systems were upgraded, this wouldn't have happened.

Charging phones, power banks, and rechargeable lights, whenever you get the chance, can help a lot. Candles and kerosene lamps should be removed from stores and put in strategic places. Furthermore, to prevent colds, which are prevalent in this weather, one can include cinnamon and honey in their breakfast which boosts the immune system preventing runny noses and sneezes.

For a Muslim, the rainy seasons are special because one can use his most powerful spiritual weapon effectively: the du’a ( supplication).

It was narrated by Sahl ibn Sa’ad that Rasulallah said: ''Two will not be rejected, the supplication when the adhan (call of prayer) is being called and at the time of the rain.''

Sahih Bukhari reported that Rasulullah used to say the following when it rained: ''Oh Allah, let it be a beneficial downpour,’' and after it rained, he would say, ''It has rained through the grace and mercy of Allah.''

This are just but a few of the supplications one can say during the rainy seasons. In Hisnul muslim: Fortress of the Muslim, a book on supplications, which is also available as a phone app, you can find these supplications and recite them when it rains.

The message is great. Jazakillah khyr Ukhty. May we be able to implement if not all, most of the tips offered.