Editor’s Note: Cookies are tasty and dangerous: dangerous because they can be addicting. One minute you are sipping some afternoon chai and the next minute you consumed your chai along with six or seven of those sugary, buttery, baked goodies. No time to run to the store but craving some? No worries. Our very own food expert, Farhat Abbas, brings you this simple multicoloured cookies recipe from her kitchen. Be careful though, you might make it to ten with that chai...

2 Food pastes for colouring  (blue and red or pink)

In a large bowl, sift together the flour, baking powder, cinnamon, and salt. Beat butter using an electric whisk until fluffy (about 3 minutes). Add sugar and beat, for about two more minutes, until light and fluffy.

Add your eggs, one at a time, beating after each addition. Then, beat in the vanilla. Beat in the flour on LOW just until combined...or you might end up looking like a ghost if you beat too hard.

Divide your mixed dough into three. Take a third of the dough, form into a square, and wrap in plastic wrap.

Take another third of the dough and beat while squeezing several drops of red or pink food colouring into the bowl. Continue beating and adding the food colouring until you are satisfied with the colour and it is evenly distributed. Wrap in plastic wrap and set aside.

Do the same with the blue food colouring and the final third of the dough.

When done, refrigerate the three doughs for 30-45 minutes.

Cut each square dough into two pieces. Roll out one strip of each colour into rectangles. Now tightly roll up the first dough (blue) into a log until you have about a quarter of unrolled dough left. Put the second colour onto the unrolled blue end and continue to roll up until you have a quarter of the second coloured dough left. Add the last non-coloured strip and continue to roll until the whole dough is rolled up into a log. (As you roll out the dough, make sure to do it between parchment paper or cling film to avoid stickiness).

Wrap in plastic wrap / cling film and refrigerate for about an hour.


Repeat the process with the remaining strips of dough to form another log. 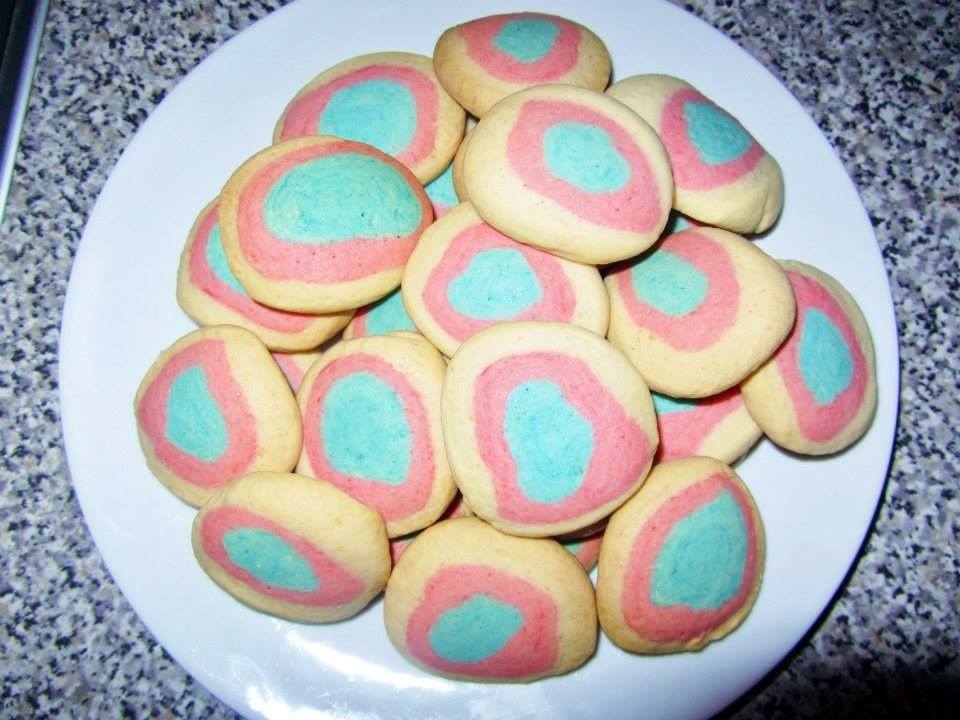 Cookies are tasty and dangerous: dangerous because they can be addicting.[/caption]

After an hour, remove the logs from the refrigerator and roll each log on the counter several times to prevent the bottom from flattening. Refrigerate for three hours or more, and then transfer to the freezer for storage. Keep the dough frozen until you are ready to slice and bake.

When you are ready to bake, preheat the oven to 350F (approximately 170-180C), and grease two large baking sheets.

Using a sharp knife, slice the dough into a quarter-inch thick slices and place them an inch and a half apart on the baking sheets. Bake until the non-coloured dough is slightly golden (nine to eleven minutes).

They’ll be so good, they’ll be unforgettable.

My name is Farhat Abbas, I love to cook and bake so much. I got so much passion in cooking in general; I always cook at home, I believe freshly cooked meals or homemade dishes taste best and they are much healthier than takeaway, moreover is cheaper. In addition to that, I love to eat food that looks gorgeous and taste yummy!