It goes without saying that without Islam there can be no Islamic architecture. Likewise, without true Muslims, who in their thoughts, actions and words epitomize the total message of Islam, there can be no Islamic architecture either. Islamic architecture is a framework for the implementation of Islam, a framework which exists in order to facilitate, encourage and promote such an implementation. It therefore cannot exist in solidarity; it is influenced by Islamic worldview, ethos, doctrines, laws, practices, genesis and history. Islamic architecture finds its highest expression in religious buildings such as the masjid and madrasa. Early examples of Islamic religious architecture include The Dome on the Rock in Jerusalem (AD 691) and The Great Mosque (AD 705) in Damascus. Some of the distinct Islamic features here include domes, columnar arches, mosaics, large courts for congregational prayer and a mihrab.

Left: The Dome of the Rock, Jerusalem. Right: The Great Mosque, Damascus. The two buildings have domes, columnar arches, mosaics and large prayer courts, all hallmarks of Islamic Architecture.


Distinguishing motifs of Islamic architecture have always been ordered repetition, radiating structures, and rhythmic, metric patterns. In this respect, fractal geometry has been a key utility, especially for mosques and palaces. Islamic philosophy is also evident in the design of residential buildings. Here, the typical features include: 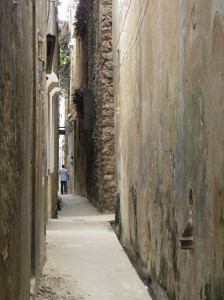 Top: Typical courtyard architecture of a residential house in Lamu, Kenya. Bottom: A narrow street also in Lamu Kenya. The walls are closed off to the street, creating privacy for the residents.


When it comes to palaces, Islamic architecture tried to inspire the same refreshing feeling of finding an oasis in the desert. This style of architecture flourished during the Dark Ages, especially in Andaluz, Spain. Islamic architects built structures surrounded by gardens. These buildings even had running water long before any European households had plumbing. Water was a very important element. A good example of Islamic palace architecture would be the Alhambra Palace in Granada, Spain. It was built by for the last Muslim emirs in Spain and its court of the Nasrid dynasty in the 11th century.

Image showing the exterior of Alhambra Palace. The building is designed to provide privacy towards the inside, thus the exterior articulation is minimalist.

Image showing the courtyard of the palace. Great care was taken in the design of the facades, where mathematical formulae were used to achieve proportions.

Water fountains within the palace courtyards. Water is a very important element in Islamic architecture.


In conclusion, Islamic Architecture, in its purest form, is the built manifestation of the Islamic religion. It strives for beauty through proximity to God.
Comments