This article was originally published on lostislamichistory.com

Is the Quran Unchanged?

A copy of Uthman's Mus'haf, kept in Topkapi Palace in Istanbul

During the caliphate of Uthman, from 644 to 656, a new issue regarding the Quran arose in the Muslim community: pronunciation. During the life of the Prophet ﷺ, the Quran was revealed in seven different dialects - qira’as. The dialects differed slightly in their pronunciation of certain letters and words, but the overall meaning was unchanged. These seven dialects were not an innovation brought in by corruption of the Quran in later years, as it was mentioned by the Prophet ﷺ himself, and there are numerous sayings of his describing the authenticity of all seven dialects that are recorded in the hadith compilations of Bukhari and Muslim. The reason for there being different dialects for the Quran was to make it easier for different tribes around the Arabian Peninsula to learn and understand it.   During Uthman’s reign, people coming into the Muslim world at its periphery, in places like Persia, Azerbaijan, Armenia, and North Africa were beginning to learn the Quran. An issue arose for them when it came to pronunciation of words, as they would hear different Arabs pronouncing the same verses differently. Although the different pronunciations were sanctioned by the Prophet ﷺ and there was no inherent harm in people reciting and teaching them, it led to confusion among new non-Arab Muslims.   Uthman responded by commissioning a group to come together, organize the Quran according to the dialect of the tribe of Quraysh (the Prophet ﷺ’s tribe), and spread the Qurayshi dialect to all parts of the empire. Uthman’s team (which again included Zaid bin Thabit) compiled a Quran into one book (known as a mus’haf – from the word for page, sahifa) based on first hand manuscripts along with the memories of the best Quran reciters of Madinah. This mus’haf was then compared with the copy that Abu Bakr commissioned, to make sure there were no discrepancies. Uthman then ordered numerous copies of the mus’haf to be made, which were sent to far off provinces throughout the empire, along with reciters who would teach the masses the Quran.   Because the Quran was now compiled and being produced on a regular basis, there was no need for the numerous fragments of verses that people had in their possession. He thus ordered that those fragments be destroyed so they cannot be used in the future to cause confusion among the masses. Although Orientalists use this incident to try to prove the erroneous claim that there were some discrepancies that Uthman wanted to eliminate, that is a simplistic way of looking at the event. The entire community in Madinah, including numerous eminent Companions such as Ali ibn Abi Talib, willingly went along with this plan, and no objections were voiced. Had he been eliminating legitimate differences, the people of Madinah would have surely objected or even revolted against Uthman, neither of which happened. Instead, the mus’haf of Uthman was accepted by the entire community as authentic and correct.

The Script of the Quran

Another complaint that Orientalists make deals with the fact that the Mus’haf of Uthman lacked any diacritical marks (dots that differentiated the letters and vowel markings). The letters seen in his mus’haf are thus just the skeletal base of Arabic letters. For example, the word قيل (he said), without diacritical marks would look like this: ڡٮل. According to the claims of Orientalists, a reader can then read the word as فيل (elephant), قبل (before), or قَبّل (he kissed). Clearly, reading such different words would have a huge difference in meaning. Orientalists such as the Australian professor of the early 1900s, Arthur Jeffery, claim that Uthman’s copy of the Quran, with its lack of diacritical marks made it possible for variant readings, and thus variant meanings to exist, making the Quran today not authentic. There are numerous flaws in this argument: First, the fact that Uthman sent reciters with his copies of the mus’haf is of huge importance. We must remember that the main way the Quran was preserved was orally, and the written copies were only meant to be a supplement to oral recitation. If someone already has a verse memorized, the skeletal letters in a copy of Uthman’s mus’haf served only as a visual aid when reciting. To illustrate this example, we can look at the following inscription on the inside of the Dome of the Rock, in Jerusalem. The building was built in the late 600s and features one of the oldest calligraphic inscriptions in Arabic on the inside of the building, written in the same Kufic script as Uthman’s mus’haf:

For someone familiar with the Arabic language and some basic common phrases regarding the supremacy of Allah, it is easy to make out what this part of the inscription says:


In the name of God, the Merciful the Compassionate. There is no god but God. He is One. He has no associate. Unto Him belongeth sovereignity and unto Him belongeth praise. He quickeneth and He giveth death; and He has Power over all things. Muhammad is the servant of God and His Messenger.4
In the same way as this passage, the mus’haf of Uthman could be easily read by someone who was familiar with the verses and the Arabic script. Thus the claim that the lack of diacritical marks makes it impossible to know what the original word was is clearly baseless.   The second problem with the claims of Orientalists like Jeffery deals with the idea of reading a word completely wrong based on the lack of diacritical marks. Let us assume for a moment that there are no reciters around to explain how a verse should be read from Uthman’s mus’haf and someone comes across the word ڡٮل. As we stated earlier, this can be a number of different words based on where the diacritical marks are. However, from context clues, an educated reader can easily figure out what word it is supposed to be. It is almost impossible for a reader to replace the word “before” with “elephant” and have the sentence still make sense. While in some cases a reader may accidentally replace one word with another that still makes sense, these occasions are rare with the way the Arabic language is set up, and all that is still assuming there are no Quranic reciters around to guide the reader.   Over time, during the 700s and 800s, diacritical marks began being added to the mus’hafs throughout the Muslim world. This was done as the Muslim world shifted from an oral to a written society, to further facilitate reading from a copy of the Quran, and to eliminate errors by people who did not already know the verses they were reading. Today, almost all modern mus’hafs include diacritical marks on the skeletal letters along with vowel markings to make reading easier.


One of the most pressing issues in the eyes of the early Muslims was the protection of the sanctity of the Quran. Numerous times throughout the Quran and sayings of the Prophet ﷺ, the Muslims are reminded that the Jews and Christians corrupted their texts over time, which now cannot be taken as authentic. As a result, early Muslims developed a system for ensuring that the Quran and hadith would not be subject to change by human error, either intentional or unintentional.   The system that developed is known as the isnad system. The isnad system emphasized the sanad, of a particular saying. For example, in the hadith compilation of Bukhari, each hadith is preceded by a chain of narrators that goes from Bukhari back to the Prophet Muhammad ﷺ. This chain is known as a sanad. To ensure that the hadith is authentic, each narrator in the chain must be known to be reliable, have a good memory, be trustworthy, and have other righteous qualities. 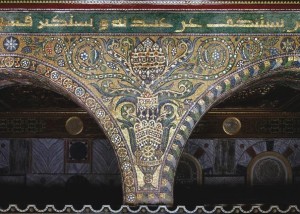 Part of the Arabic inscription in the Kufic script inside the Dome of the Rock, built in 691.[/caption]

The early Islamic community placed huge emphasis on this system for determining the authenticity of hadith as well as verses from the Quran. If someone were to claim to have had a verse that was not in the canonical text of Uthman’s mus’haf, scholars would look at the chain that person claimed went back to the Prophet ﷺ and determined from it if there was a chance that it was authentic. Clearly, anyone forging verses of the Quran would not be able to connect it to the Prophet ﷺ, and his/her claim would be discounted according to the isnad system.   The isnad system thus worked to preserve the sanctity of the Quran as well as the hadith, as it prevented people from making erroneous claims that could then be accepted as fact. Through the focus on the the reliability of the sanad, the reliability of the verses or hadith themselves could be ascertained. Zaid bin Thabit used a proto-isnad system in his work compiling the Quran during the caliphate of Abu Bakr, and the growth of the isnad system in subsequent decades helped protect the text from being altered in any way.


This article is not meant to be a fully exhaustive study of the history of the Quran. The scholarship of hundreds of people throughout Islamic history to ensure the sanctity of the Quran cannot be boiled down to a few thousand words. However, it is clear through the introductory issues mentioned here that the text of the Quran clearly was not altered from the time of Muhammad ﷺ to the present day. The fact that it was so widespread during his life helped ensure that any malicious attempts to change the words of the holy book would be futile. The meticulous compilation of the text by Abu Bakr and Uthman served as a backup system in case the oral preservation of the Quran was lost. Finally, the isnad system helped ensure any claims to add to or remove from the Quran could not pass by a scholarly process that was central to the preservation of Islam itself.   In conclusion, the claims of Orientalists that the Quran has been changed overtime as the Bible and Torah have are clearly misleading. There is no evidence backing up the idea that the Quran has changed, and attempts to prove that it has are based on rudimentary and uneducated understandings of the history of the Quranic text.