The word Jihad is an Arabic word derived from ‘jahada’, which means to strive or to struggle. Similar words from the same root are effort and labour. The effort to practice religion while facing oppression and persecution is referred to as Jihad and this effort can be in fighting the evil in one’s own heart or in standing up to a dictator. Islam does not fit into the usual ‘stereotype’ of using force or military effort as an option of jihad i.e. "to spread Islam by the sword”.

Since 9th September 2011, the word jihad gained even more notoriety when the whole world associated it with terrorism due to the media coverage of the Twin Towers plane crashes in international media forgetting all the other terrorist acts against individuals, nations, races, cultures, and even faiths all over the world.

Islam does not encourage terrorism but calls for peace as the word ‘Islam’ in Arabic means ‘Peace’. Allah says in the Qur’an: “O mankind! We have created you from a male and a female, and made you into nations and tribes, that you may know one another. Verily, the most honourable of you with Allah is that (believer) who has At-Taqwa. Verily, Allah is All-Knowing, All-Aware.” (Qur’an 49:13)

Striving to be a better person helps to make the society a better place for everyone so it is important for personal jihad against vices and bad habits such as drinking alcohol, smoking, stealing, adultery, backbiting, gambling etc. This type of struggling against temptations is also a type of Jihad .Personal Jihad is one’s struggle to make oneself a better human being and this is usually considered the greater jihad.

In the same way, one may struggle to study and learn and being patient while doing so. This is also considered jihad in Islam and is a good thing as seeking knowledge, especially religious knowledge, is obligatory upon every Muslim. One may also strive to work well and do it right and fairly. This struggle also counts as jihad.

Daawah or working towards spreading the religion of Islam is considered Jihad as seen in the noble words of the Qur’an:

“Invite (mankind, O Muhammad) to the Way of your Lord (i.e. Islam) with wisdom (i.e. with the Divine Inspiration and the Qur'an) and fair preaching, and argue with them in a way that is better. Truly, your Lord knows best who has gone astray from His Path, and He is the Best Aware of those who are guided.” (Qur’an 16:125)

In Islam, the perspective of striving and struggling in way of Allah can include many things such as abstaining from taking bribes (Qur’an 2: 188). It can also be seen in respecting, looking after and honouring parents (Qur’an 2:82 and 2:115; 31:14; 46:15) as well as taking care of neighbours and being good to them (Qur’an 107:7). Anyone who strives to promote peace on the earth is striving in the cause of Allah – ‘Jihad Fee’sabeelillah.’

Striving to be a better person helps to make the society a better place for everyone and is an important personal Jihad.[/caption]

Self-defence in the battle-field can also be considered Jihad and is referred to as ‘Kital’ though despite the common misconception that Jihad and Kital are one, it is not so. It is one of the highest form of Jihad as a last resort in the battlefield but only after several efforts at conciliation has failed. This was even seen during Prophet Muhammad (sallallahu alaihi wasalaam) times in the battlefield but the total number of casualties in all the wars that took place during his lifetime, when the whole Arabian Peninsula came under his banner, does not exceed a few hundred in all. He laid down various conditions, rules and regulations for battle in the field 1400 years ago. In Islam it is a last resort to fight for the truth against falsehood in order to preserve peace and tranquility in society.

Jihad in Qur’an and Hadith

In the Noble Qur'an, Jihad is described as a system of checks and balances, so that if one person or group transgresses and violates the rights of others, Muslims have the right and the duty to stop them and bring them back into line. Verses in the Qur'an describing jihad this way include: “And did not Allah check one set of people by means of another, the earth would indeed be full of mischief; but Allah is full of Bounty to all the worlds." (Qur'an 2:251)

Muslims are commanded in the Qur’an not to start hostilities or attack, violate the rights of others, or harm the innocent including hurting animals or trees. War is only waged to defend the Muslims against oppression and persecution. The Qur'an says that "persecution is worse than slaughter" and "let there be no hostility except to those who practice oppression" (Qur'an 2:190-193). This then teaches Muslims that there is no reason to declare war if non-Muslims are peaceful or indifferent to Islam.

The Qur'an also says, "Let there be no compulsion in religion". (Qur’an 2:256) No-one should be forced to choose Islam or death and there is no question of waging a "holy war" to "spread the faith" and compel people to embrace Islam as that would be an unholy war and the forced converts would not be sincere.

Performing hajj (pilgrimage) is ‘jihad’ - Narrated By ‘Aisha (The mother of the faithful believers): I said, ‘O Allah’s Apostle! We consider Jihad (kital in battle field) as the best deed. “The Prophet said, “The best jihad (for women) is hajj Mabrur.” (Sahih Bukhari - Vol 2 Ch 26 Hadith 595)

Anyone striving against his own evil intention is jihad and therefore trying to become a good human is jihad -“The person who strives and struggles against his own (evil) will.” (Sahih ibni Habban: Hadith 4862)

Jihad describes one’s duty towards Islam and stands for struggle. One may struggle to protect one’s family, to save someone’s life or even fight for country and religion. On the other hand, terrorism’s sole purpose is to cause harm, pain and agony to people to make them feel insecure and this can be in the form frequent attacks of mass destruction and killings.

Terrorism usually has nothing to do with religion since no religion in the world today and most definitely not Islam would preach destruction of property, lives and condone killings of innocent people. Terrorists are people usually indulging in fear-mongering mainly for materialistic gains or to mark territory while jihad is the struggle in the path of God. 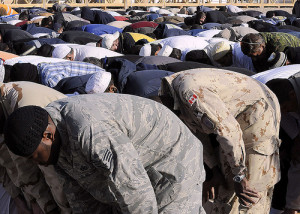 The inner and outer Jihad: Soldiers praying on Eid[/caption]

We can conclude that jihad comes in various forms and one needs to understand the true meaning and purpose of jihad in Islam.

Posting comments after has been disabled.

A young dreamer, Hyder is passionate about Islam, technology and business. He hates the restraints of formal education and loves knowledge. Hyder is part of the CORE Ummah Team. Find him at https://twitter.com/redyh32